Coronavirus (COVID-19): what you need to do

Do not meet others, even friends or family.

You can spread the virus even if you don’t have symptoms.

beta Complete our quick 5-question survey to help us improve our content.

Give feedback about this page

From:
Design community
Last updated:
over 3 years ago

You must make prototypes of your service to explore, share and test different designs before you commit to building anything.

You can quickly make and test multiple prototypes and discard the ones that don’t test well.

Making prototypes is important because it:

When to use prototypes

You must use prototypes in the alpha phase of your service to explore and test different approaches to the design of the service.

Continue to use prototypes in the beta and live stages of your service to explore potential new features or improvements. 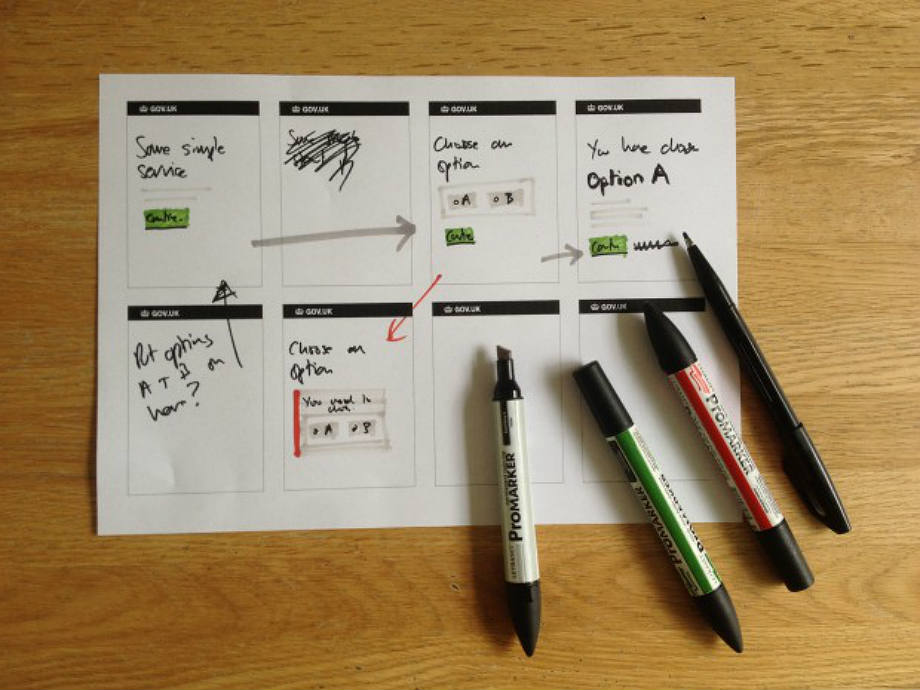 Prototypes can vary in style from a quick pen and paper sketch to a code prototype that works like a fully interactive website.

You should use the prototype that best meets your needs at the time.

Sketches are useful for exploring and discussing basic ideas with colleagues.

Prototypes built in code can look and behave like the live GOV.UK site and are the best approach if you want to test realistic interactions that a user has with your service.

The advantages of prototypes built in code are that:

The code in a prototype doesn’t need to meet the same standards as production code. For example, it doesn’t need to be secure or to perform well with large volumes of traffic.

The point is to test ideas as quickly as possible. If an idea tests well, you may want to work with a developer to make your code a bit clearer so that it’s easier for others to work with.

The GOV.UK Prototype Kit lets you build realistic prototypes of your service that look and behave like GOV.UK.

It comes with detailed installation instructions and some example pages to get you started.

To use it you’ll need some basic knowledge of HTML, for example what tags and attributes are and how to copy and paste code.

Alternatively, you can work with developers on your team to create prototypes together.

Publishing on the web

You can share code prototypes by publishing them on the web.

When you’ve uploaded your prototype, you can easily share it with others. You must protect access to your prototype with a password so that members of the public don’t find it and mistake it for a real service.

You must not use the GOV.UK Prototype Kit to make live services. It’s designed for prototyping and does not have the security or performance features needed for a live service.

Multiple people can collaborate on the same prototype using software called Git. The GOV.UK Prototype Kit has guidance on how to set up Git for your prototypes.

Read these user research guides to find out more about how to test your prototypes:

Read these blog posts to find out more about prototyping: