Provisional car licence holders MUST NOT drive on the motorway unless they are accompanied by a DVSA Approved Driving Instructor (ADI) and are driving a car displaying red L plates (or D plates in Wales) with dual controls.

Traffic on motorways usually travels faster than on other roads, so you have less time to react. It is especially important to use your mirrors earlier and look much further ahead than you would on other roads.

Signs and signals (see ‘Light signals controlling traffic’) are used to warn you of hazards ahead. For example, there may be an incident, fog, a spillage or road workers on the carriageway which you may not immediately be able to see.

A single sign or signal can display advice, restrictions and warnings for all lanes.

Lane specific signs and signals can display advice, restrictions and warnings that apply to individual lanes.

Amber flashing lights. These signals warn of a hazard ahead. You should

Rule 257: Signal warning of a hazard

Red flashing light signals and a red ‘X’ on a sign identify a closed lane in which people, stopped vehicles or other hazards are present. You 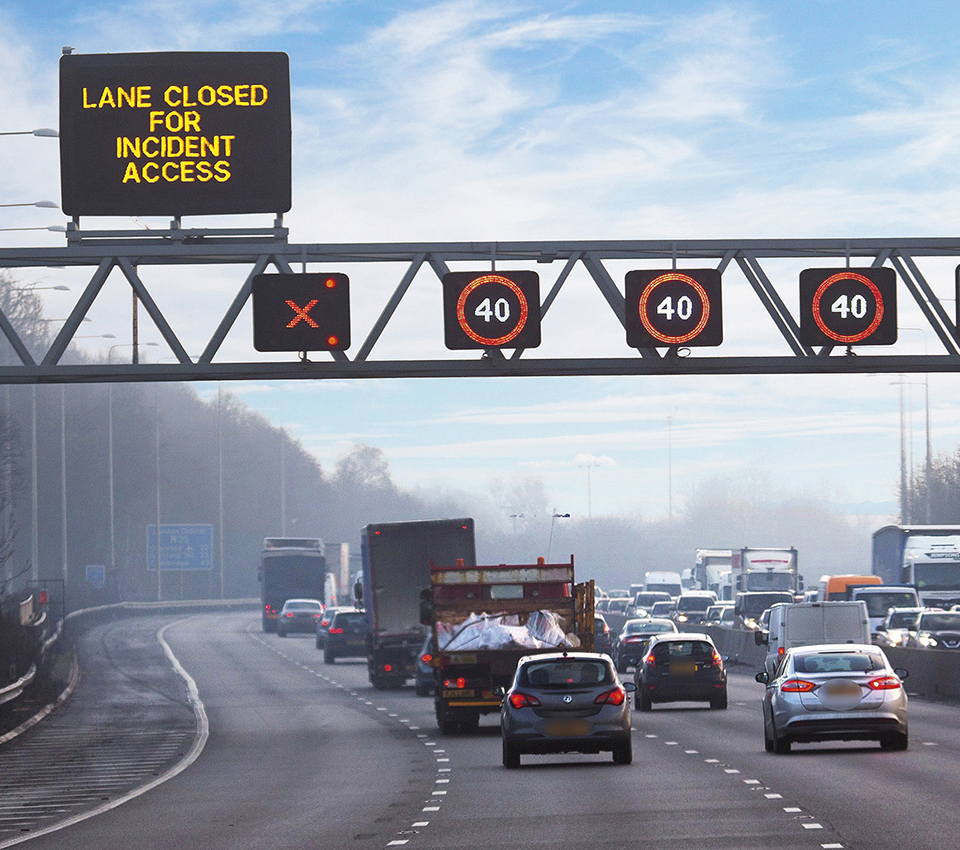 Where red flashing light signals and closure of all lanes are shown on a sign, the road is closed. You

Lane and road closures indicated by red flashing lights are enforced by the police.

Joining the motorway. When you join the motorway you will normally approach it from a road on the left (a slip road) or from an adjoining motorway. You should

When you can see well ahead and the road conditions are good, you should

You MUST NOT exceed

Speed limits are enforced by the police (see Rule 124).

The monotony of driving on motorways and other high-speed roads can make you feel sleepy. To minimise the risk, follow the advice in Rule 91 about ensuring you are fit to drive and taking breaks.

Service areas are located along motorways to allow you to take breaks and to obtain refreshments. Refreshment and rest facilities on the local road network may also be accessible from motorway exits.

Unless directed to do so by a police or traffic officer, you MUST NOT

If you have missed your exit, or have taken the wrong route, carry on to the next exit.

Keep in the left lane unless overtaking.

Approaching a junction. Look well ahead for signals, signs and road markings. Direction signs may be placed over the road. If you need to, you should change lanes well ahead of a junction. At some junctions, a lane may lead directly off the road. Only get in that lane if you wish to go in the direction indicated by signs or road markings.

Do not overtake unless you are sure it is safe and legal to do so. Overtake only on the right. You should

Do not overtake on the left or move to a lane on your left to overtake. In congested conditions, where adjacent lanes of traffic are moving at similar speeds, traffic in left-hand lanes may sometimes be moving faster than traffic to the right. In these conditions you may keep up with the traffic in your lane even if this means passing traffic in the lane to your right. Do not weave in and out of lanes to overtake.

Hard shoulder (where present). You MUST NOT use a hard shoulder except in an emergency or if directed to do so by the police, traffic officers or a traffic sign.

Where the hard shoulder is being used as an extra lane, emergency areas are provided for use in an emergency (see Rule 270).

Emergency areas are located along motorways with no hard shoulder or where the hard shoulder can be used as an extra lane (see Rule 269) and MUST only be used in an emergency.

They are marked by blue signs with an orange SOS telephone symbol and may have orange surfacing. 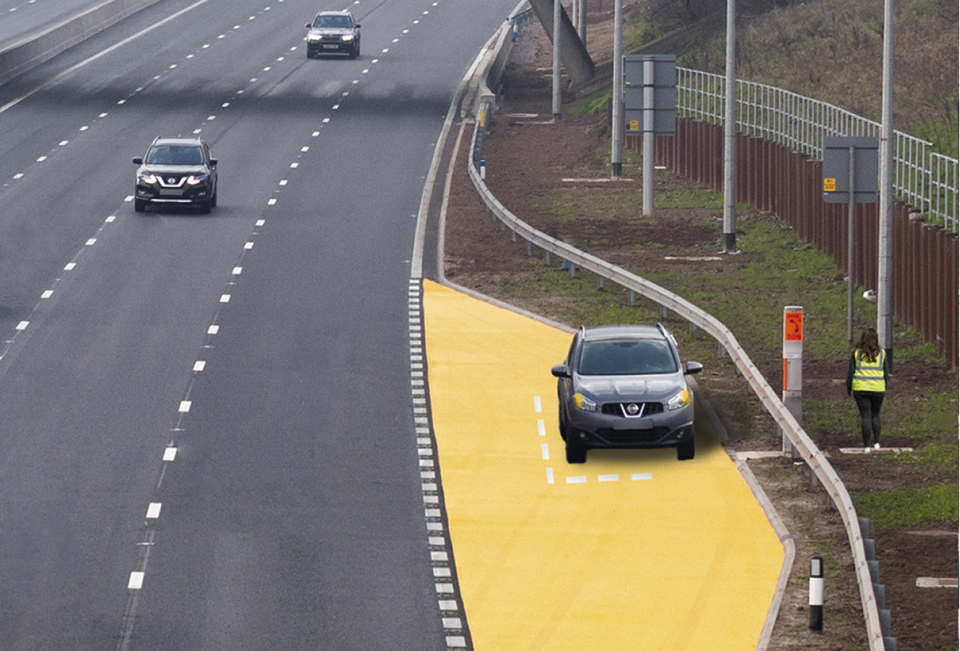 You MUST NOT stop on any carriageway, emergency area, hard shoulder, slip road, central reservation or verge except in an emergency, or when told to do so by the police, traffic officers, an emergency sign or by red flashing light signals.

Do not stop on any part of a motorway to make or receive mobile telephone calls, except in an emergency.

You MUST NOT pick up or set down anyone, or walk on a motorway, except in an emergency.

Unless signs indicate that a lane leads directly off the motorway, you will normally leave the motorway by a slip road on your left. You should

On leaving the motorway or using a link road between motorways, your speed may be higher than you realise - 50 mph may feel like 30 mph. Check your speedometer and adjust your speed accordingly. Some slip-roads and link roads have sharp bends, so you will need to slow down.