It’s recommended that you use wheel play detectors when checking axle security on beam axles.

To check the condition of stub axles:

Then check for play in components using either:

Vehicles with a DGW more than 5,000kg do not need to have rear wheel bearings inspected.

Assess play in wheel bearings by either:

Also, rotate each wheel to check for noisy wheel bearings due to excessive roughness.

You only need to inspect the road wheels fitted to the vehicle at the time of the inspection. If you notice a defect on a spare wheel, you should tell the vehicle presenter about it.

You must not remove wheel hub caps.

You can accept abutting ends on detachable spring retaining rings on wheel rims of semi-drop centre type (identified by the ends of the ring shaped to interlock) as long as the retainer is adequately and safely located in the wheel rim.

You only need to inspect the tyres fitted to the road wheels at the time of the inspection. If you notice a defect on a spare tyre, you should advise the vehicle presenter.

‘Standard’ car tyres have a nominal aspect ratio of 82% (unless marked otherwise) and these are almost identical in size to tyres with an aspect ratio of 80%. They can be safely mixed in any configuration on a vehicle.

Load rating - Classes 5 and 7 only

A tyre load rating table is in Appendix B.

Make sure the tyre load rating is suitable for the axle weight.

You can find the permitted maximum laden weight of an axle on the manufacturer’s plate.

If axle weights are not displayed on the manufacturer’s plate, you must assume that the load capacity of the tyres are suitable, unless there’s indisputable evidence to suggest otherwise.

If a goods vehicle has a ‘Ministry’ plate showing lower axle weights not to be exceeded in Great Britain, you must use those instead of the ones on the manufacturer’s plate.

Speed rating - Classes 5 and 7 only

A tyre’s speed rating is shown on the sidewall as a letter and usually precedes or follows the load rating. Speed ratings from A to K are unacceptable, with the exception of H.

If no speed rating is shown it must be assumed that the minimum requirements are met.

Tyres must be suitable for use up to 70mph (L speed rating) unless the vehicle is a ‘restricted speed vehicle’.

If the tyre can carry the maximum permitted axle weight of the vehicle, these vehicles can use tyres with a lower speed rating tyres up to 70mph as follows:

You must not accept a tyre load rating that’s less than the maximum permitted axle weight.

Tyres of different types of structure, such as radial-ply and cross-ply, must not be mixed on the same axle.
Steel and fabric radial-ply tyres are considered to be the same structure.

Run flat and conventional tyres can be mixed on the same axle, although this is not recommended.

Some vehicles have lock stops comprising rubbing pads on the body that the front tyres may contact on a full lock. These are acceptable if they are properly maintained so that they do not damage the tyres.

When assessing cuts in a tyre, it is permissible to check whether a cut is deep enough to reach the ply or cord by using a blunt instrument to open the cut taking care not to cause further damage.

The following criteria should be used when assessing a cut in a tyre:

Before failing a cut, you must make sure it’s the cords that you can feel not a foreign object. If you’re not sure, then you should pass and advise.

When assessing lumps or bulges in a radial ply tyre, care should be taken to distinguish between normal undulations in the carcass, resulting from manufacturing, and lumps or bulges caused by structural deterioration.

Recut tyres are only permitted on:

You should only accept tyres with NHS, Not for Highway Use or similar markings if they have an ‘E’ marking and a number contained within a circle. Adjacent to this circle, the sidewall must also be marked with a six digit number, which may be preceded by 75R or similar marking (see example below).

Asymmetric tyres are marked with correct fitment information on the sidewall, such as ‘outside’. However, if an asymmetric tyre is fitted the wrong way around it is not to be considered a reason for rejection. The presenter should be advised.

A tread pattern is the combination of plain surfaces and grooves extending across the breadth of the tread and round the entire circumference. It excludes any tie-bars, tread wear indicators, or features designed to wear out substantially before the remainder of the pattern, and other minor features.

The ‘breadth of tread’ is the part of the tyre which can contact the road under normal conditions of use measured at 90 degrees to the peripheral line of the tread.

The following vehicles first used on or after 3 January 1933 need 1.6mm tread depth:

The primary grooves of the tread pattern must be at least 1.6mm deep within the central three-quarters of the breadth of tread and around the entire outer circumference of the tyre (see diagram 1).

Either side of the central three-quarters of the tyre can be devoid of tread (‘bald’).

The following vehicles must have 1.0mm tread depth:

The tread pattern must be visible over the whole tread area (see diagram 2), and have a depth of at least 1.0mm throughout a single band of at least three-quarters over any section of the breadth of tread round the entire outer circumference of the tyre.

The 1.0mm tread depth requirement applies to the whole tread width if the original tread pattern did not extend beyond three-quarters of the tyre width when new. 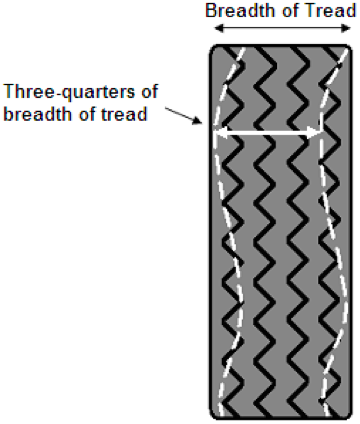 The inspection of the tyre pressure monitoring system (TPMS) is for M1 vehicles first used on or after 1 January 2012.

The TPMS warning lamp (see diagram 3) can operate in many ways depending on the vehicle type. You must only reject vehicles if it’s clear that the lamp indicates a system malfunction and not simply indicating that one or more of the tyre pressures is low.

The check of tyre age applies to all vehicles with more than 8 passenger seats, other than vehicles of historical interest.

Tyre age is determined by the date code on the sidewall and will be a three or four-digit code. Tyres with a three-digit code will be more than 10 years old.

The code is usually located in a ‘window’ on the sidewall and may or may not be located at the end of the DOT number (see image below).

Tyres over ten years old at the time of test must be failed if they are on:

Tyres not displaying a date code must also be failed. However, date codes are only required to be marked on one side of the tyre so it may not be possible to see the date code on twin wheel fitments. Under these circumstances you should advise the presenter and assume the date code is present and the tyre age is acceptable.

On tyres where the date code is illegible, for example, due to kerbing or deliberate tampering, a major or minor defect must be recorded, depending on the location of the tyre.

Remoulded/retreaded tyres may have two date codes. One being the original code and the other being the date of retreading. In this case the most recent date code must be used.

The appearance of the date code on retreaded tyres may be different from the original date code and may be branded rather than moulded.

You should not reject vehicles with leaf spring type suspension if modified spring anchor or shackle brackets are fitted and there are more mounting holes in the bracket than holes in the chassis.

Defect 5.3.1.b also applies to that part of a leaf spring which is curled to prevent disengagement from a slipper.

You should assess the security of a coil spring to the chassis or axle when jacking and lowering the vehicle. If the spring does not correctly locate when the suspension is returned to its normal running position, then you should reject it for being insecurely attached.

You do not need to jack the rear wheels of vehicles with a DGW more than 5,000kg.

An unsafe modification includes welded repairs or the use of excessive heat to highly stressed components (see Appendix A) and modifications which are likely to affect the roadworthiness of the vehicle.

You should reject a missing shock absorber only if they were fitted as standard.

A shock absorber must be rejected if negligible damping effect becomes evident at any point during the inspection.

Some vehicles use thin gauge steel pressings for some highly stressed suspension components. Many of these parts have hollow ‘box sections’ or up-facing areas that can collect road dirt, salt or other chemicals that can cause severe local corrosion.

You should pay special attention to these components.

You can find guidance on assessing corrosion in Appendix A.

It may be easier to inspect suspension components with the wheels jacked for the checks in Section 5.3.4. You do not need to jack the rear wheels of vehicles with a DGW more than 5,000kg.

Some rubber/synthetic bushes are designed to provide a comparatively high degree of compliance and are therefore likely to show some movement.

You should only reject rubber or synthetic bushes when you can see serious deterioration of the bonding or flexible material.

You should assess wear or play in spring pins and bushes using either:

Wear is excessive if play is more than:

To fully assess the condition of front suspension components you should use wheel play detectors.

If wheel play detectors are not available, do the following:

For vehicles with front suspension systems that do not have the torsion bar or spring force acting on the lower suspension arm follow these steps:

Beam axles should be jacked under the beam.

All other suspension types must be jacked so the suspension hangs freely. 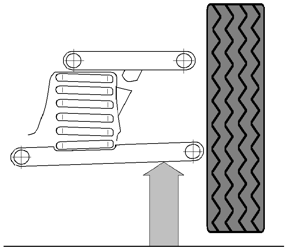 Ensure the jacking equipment is positioned to allow the safe examination of components without risk of injury or damage to the vehicle.

Use your experience and judgement when positioning the jacking equipment to ensure that suspension spring force is removed from components to allow a proper examination for wear/play.

On some vehicles it may be necessary to jack in more than one position to carry out a full examination.

You do not need to jack the rear wheels of vehicles with a DGW more than 5,000kg.

When testing vehicles with these suspension types, you should be aware of the health and safety hazards.

See the Introduction health and safety section for guidance.

You can find guidance for assessing corrosion in Appendix A.

See Section 6 for guidance on checking the condition of the main load bearing structure not within a prescribed area.

Check the strength and continuity of the vehicle’s load bearing members and their supporting structure or panelling around any spring, sub-frame or suspension component mounting.